Microsoft Flow enables organizations to build workflows for Microsoft cloud-based systems, such as Office 365 and Dynamics. Microsoft has geared Flow for use by so-called Citizen Developers. However, Flow can prove difficult to use at times — even some relatively simple workflows can require a knowledge of coding, JSON, HTML, and other technologies.

As useful as Flow can be, the process of creating a workflow can be time-consuming and frustrating, particularly for non-tech savvy business users.

That said, the good news is that NITRO Studio and Flow work well together. NITRO can handle the bulk of workflow configuration, with Flow providing connections to outside services. In this way, NITRO handles the heavy lifting by giving non-programmers the no-code workflow tools they need, while using Flow primarily for connectivity purposes.

Add a Button to a Form without NITRO? Not so easy!

As mentioned above, building a Flow and putting it into use can prove troublesome. The efforts can take up significant resources and may require IT staff involvement, which negates the whole value of having an independent Citizen Developer.

One such example is the process of adding a button to SharePoint that triggers a Flow. As described in these online instructions, this relatively simple workflow requires that a non-technical business user knows how to:

The entire premise of the Citizen Developer is that the barrier between business users and process creation is removed; meaning, business users should be able to create applications, processes, and workflows with little-to-no IT background.

Simple Solution: Use NITRO Custom Actions to Run a Flow

Adding a button to a form is easily done in NITRO Studio through the use of Custom Actions. A custom action is simply a button or link that can perform whatever action (or actions) you want, such as add/update/delete a list item, upload/generate a document, send mail, execute a script, and invoke a workflow.

The action button is fully configurable in terms of the icon used, its size, where it’s placed (on the form, edit control block, or list ribbon), and even when it appears (to specific users/groups, when a condition is met, etc.).

In this example, the goal is to add a button to a form that will invoke a Microsoft Flow that saves any attachments on the form to OneDrive. This is a fairly straightforward user-initiated workflow that a Citizen Developer should be able to set up using point-and-click interface.

In the image below, we have created a NITRO Custom Action and named it “Save Attachments to OneDrive.” Business users can specify exactly where the button or link appears, what it looks like, and who can see it using the options provided under General Settings.

The Conditions section gives the opportunity to show or not show this button to certain users or under certain conditions. In the example below, the button will show when the Category of the request is “Certificates”.

In the “What Actions to execute” section, the “Send to OneDrive” and “Notify Client” actions will run when the user clicks the “Save Attachments to OneDrive” button on the SharePoint form.

Let’s take a closer look at “Send to OneDrive” action, which is of the type “Invoke Workflow”. The pencil (Edit) icon will open the details of this particular action.

In this screen, we are configuring exactly what happens when the button is clicked. In the “Workflow Settings” panel, “Microsoft Flow” is selected. The “HTTP POST URL” is the address that Flow provides when the Flow is created — copying & pasting the URL into this field is about as complicated as it gets.

That’s it! The custom action is defined and the button now appears on forms. No need to know any JSON, JavaScript, or HTML. Simply click the “Save Attachments to OneDrive” button on the SharePoint form to launch the Microsoft Flow responsible for moving the attachment to OneDrive. It’s as simple as that.

In addition, the button can launch a series of actions. In example above, the custom action runs the Flow that puts the attachment(s) in OneDrive. It also sends an email notification to a client or customer (“Notify Client” action). Other actions can be added, such as update a SharePoint list item to indicate the attachment was filed in OneDrive or create a task to review the document after a certain period of time.

Many Uses of NITRO Studio and Microsoft Flow

There are many other ways to use Flow in conjunction with NITRO Studio. A button on the SharePoint form could use Flow to send data to Salesforce, Oracle, and many other systems. The button can save files and documents to not only OneDrive, but also Dropbox and Box. The list of possible uses goes on and on, given the many connectors available in Flow.

The use of both NITRO Studio and Flow gives “Citizen Developers” a robust and easy-to-use toolset to streamline business processes that require external connectivity. NITRO provides the tools to build forms and workflows in SharePoint, and Flow brings connectivity to outside systems.

Working together, they give companies the power they need to drive workplace automation.

Crow Canyon Software delivers the power of a connected, digital workplace to your organization, helping you be more successful and competitive. We provide the tools that allow you to gain the maximum benefit from SharePoint and Office 365, Microsoft’s premier collaboration platforms.

Want to learn about how our business productivity applications for SharePoint and Office 365 can power up your organization? Give us a call at 1-925-478-3110 or contact us by e-mail at sales@crowcanyon.com. We look forward to hearing from you. 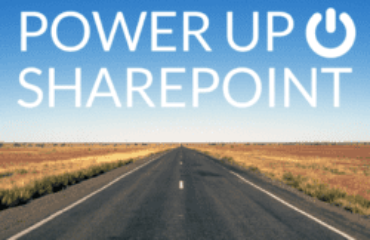